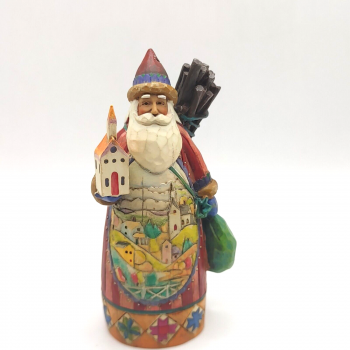 Three Wise Men and One Quilter

I’m a thrifter. I like garage sales and flea markets and thrift stores. I visit them when I travel and here at home. I adore a good bargain and I love a treasure hunt. (That’s not the confession.)

When I visited my daughter in Seattle recently, I headed to the Goodwill one rainy afternoon. And just about the first thing I spied was a set of three giant wise men by Jim Shore.

I’m sure you’ve seen these quilt-y figurines, as they’ve been going strong for more than 20 years. When they first appeared in 2001, quilters snatched them up.

At International Quilt Market in Houston, 2005, people stood in line and waited to purchase. I will admit to buying a Jim Shore nativity scene about 15 years ago, in a moment of weakness.

The truth is that I never liked it that much, but I was enamored with the idea of quilting motifs being incorporated into popular culture, if you can call it that.

If you’re a treasure hunter like me, you might be familiar with an emotion that rises up when you think you’ve found something rare or valuable. It’s like auction fever when you keep raising your hand to bid higher and higher even though you know better. That’s what happened to me with the Jim Shore wise men.

As I stood there debating about whether I really wanted them, and asking myself how I’d get them home on an airplane, and thinking that I don’t even like Jim Shore that much, I STILL PUT THEM IN MY CART.

Because they’re quilty and they were practically free at $6.99 each and how often does this happen?!?!

But here’s the thing:

Just as I putting wise man #3 into my cart, a man came up behind me and startled me by saying, “Those are cool.” I jumped, just enough to bump the wise man’s head on the metal shelf and knock it clean off.

I decapitated a wise man.

I put the beheaded monarch into my cart and picked up the broken face and hat parts from the floor. Then I walked around Goodwill for the better part of an hour agonizing.

Because now, for all practical purposes, there are only two wise men. Who wants two wise men?

Should I just pay for the broken one? Or should I buy all three and hope to glue the broken one back together? Could I put them back on the shelf?

At this point I noticed that one of the wise men I thought was whole actually had the entire back broken out of it. So honestly the set was already broken. And this internal argument goes on for a while until I realize that 50 minutes ago, I couldn’t have cared less about Jim Shore wise men. I didn’t even know they existed.

So why all this drama in my head?

To make matters worse, the backdrop of crash-break-and-clatter from the sorting room was deafening. Somehow I didn’t think Goodwill really gave a hoot about the wise men.

So I did the unthinkable: I returned two (and one dead) wise men to the shelf.

And this is where it gets really weird! Within one second, a Goodwill employee swoops in, grabs the wise men, THROWS them onto her cart and whisks them away. She doesn’t acknowledge me in any way. If I was in trouble, wouldn’t she have said, “Hey lady, you broke him, you bought him.” ? Right?

And five minutes later I saw her put ONE WISE MAN onto a different shelf in a different area of the store entirely.

Ten days later I am still worried about all of this.

And somewhere in Washington,
there’s one lonely wise man for sale.