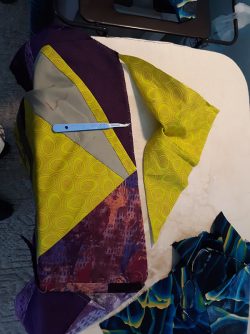 The Katy Coleman Miracle Quilt (with apologies to Joe Cunningham)

Back in 2017, Joe Cunningham (AKA Joe the Quilter) visited International Quilt Museum with his improvisational piecing techniques and it was really so much fun.

I take classes like this to expand my creativity and to get inside the minds of other designers and artists. If I end up with a quilt, so much the better.

This is what I started in Joe’s class that day. Joe was complimentary and I thought maybe it had potential. (In hindsight, I’m sure he’s complimentary to all his students.)

But you know how it goes: You get home and you’re busy and the project gets pushed aside for everything that takes up space in your life.

Fast forward to January 2020 when I posted the photo above to Instagram with the caption below:

And I think it was my friend Katie Wilson from Norfolk who recognized them as blocks from our class with Joe and told me so. How could I not remember that? I blame it on meno-brain. Anyway.

…the lovely and creative Katy Coleman, who reached out to me and offered to take them off my hands. Katy and I are acquainted through various quilt groups here in Nebraska. We don’t know each other well, which makes what she did all the more incredible.

I’m going to let her take it from here! She tells it so much better than I could.

“The Hall of the Mountain Troll King”
By Katy Coleman

A package arrived with five large improv fragments, pieced in interesting and extreme colors. Diane was right. They were not very attractive.

Dark purple, lime green, gray and assorted  misfits had found their way into the assemblage. In a moment of lunacy, I offered to finish them into SOMETHING, since they had been plaguing her for a while.

The fragments were pinned to my design wall and…it shouted at me. The crags and jagged edges said “Yes, we’re scary. Let us BE scary! Add MORE scary!”

And the strains of Edvard Grieg’s “Hall of the Mountain King” from Peer Gynt Suite crept into my  consciousness.

Editor’s note: I had to look this up. I was delighted to find this highly recognizable tune! Listen in and if you want more, read all about it.

No surprise—I am often inspired by music. But this time, the project inspired the music.

I went to my fabric stash and found a fabric that bound most of the fragment fabrics together (or at least justified using most of them). Done.

Then to…the internet. Google provided me with the links to the story behind Peer Gynt Suite, and Pinterest led me to images of trolls—vital to the story. I knew WHAT I wanted to do, but HOW to accomplish it required some serious stewing.

Stewing did not lead to a solution for using the fragments in their current state. So, following the old adage, “If a fabric is ugly, it just needs to be cut into smaller pieces,”** I cut the fragments  into 2″ strips. I thought for awhile they looked like pieces of a geode so I could add strips of silver to create a ‘mother lode’. Still didn’t work.

I started joining strips, put three sections up on the wall and the mountains reappeared. A dark streaked navy was pulled from my stash. The sky! Lightning everywhere!

The yellow was  intense enough to balance out the lime green in the mountains. The mountain crest was cut and folds were added into the surface for a second row of mountains in the foreground. A purple crayon helped shade the new line.

With a limited amount of the lightning fabric, I matched, overlapped and appliqued pieces to create unbroken lines.

The mountain peak was basted, then appliqued by machine. At this point I realized I wanted this to be a rough quilt. Primitive. Maybe even a bit barbaric.

My grandson Sullivan is a wonderful cartoonist, and having worked with children’s drawings in the past for quilts, I knew this was what this bizarre piece needed.

I gave Sully the parameters, and he sketched this super-hero-like troll king.

We enlarged the sketch and printed it on the base green fabric. Applique and embroidery followed.

Into the fire cave he went, with a rock arch and raised platform fit for a king.

Fused trees were added, and the quilt was pin basted and machine quilted.

Sticking to my primitive/barbarian plan, nothing was pre-marked, trees were randomly stitched and nothing was tied off.

Facing was used instead of binding and the piece was finished with a label.

Sullivan was overjoyed to see his troll on a quilt, and I had a really interesting time working on  this “loveable ugly.” At least that’s one more thing off of Diane’s pile of UFOs!

In the next post, my thoughts about Katy’s finish and detail photos. Until then, quilt on!