Textile Mills in Lowell, Mass and a New Quilting Friend

I’d never been to New Hampshire until this week, and only to Massachusetts once. It surprised me to hear locals call it “Mass,” as if Massachusetts is just too much of a mouthful. 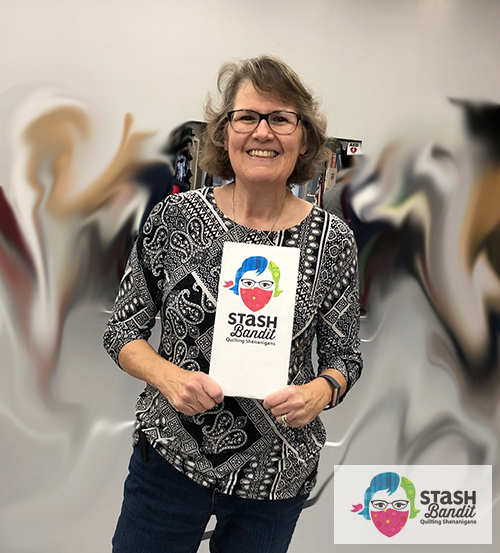 Michelle of Little Pup Designs picked me up at the airport on behalf of the Hannah Dustin Quilt Guild in Hudson, NH.

Being from the Great Plains, I’ve sometimes been led to believe that New England folks are cold and aloof. But I haven’t found that to be true. When your hostess hails you at the airport holding a nearly life-size logo for your little quilting business, you know it’s going to be a good week.

We’ll get to the quilt guilds later, but first this:

I had a free day between guilds and so my hostess Michelle, who now feels like a friend, kindly offered to take me anyplace I wanted to go. 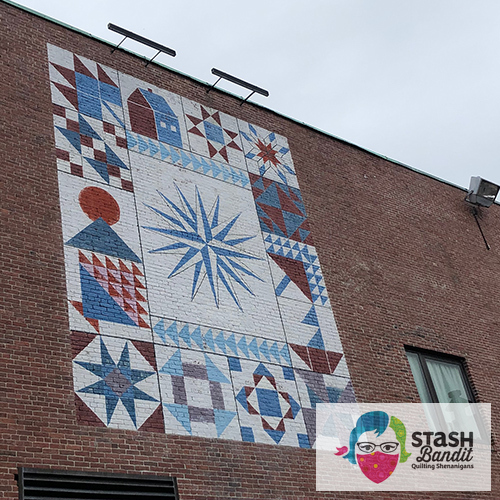 The back of New England Quilt Museum in Lowell, Massachusetts

There were endless fascinating options, but what kind of a quilter would I be if I didn’t opt for Lowell, Mass (see how easy?) which is home to the New England Quilt Museum as well as being the center of the textile business as the Industrial Revolution swept America. 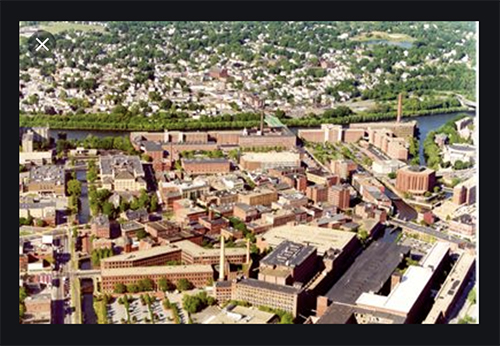 Do I need to tell you that “textile” is just another word for fabric? Probably not. As a quilter, you understand that this piece of American history is part of our history, your history, if in fact you love fabric. I grabbed the shot above because it helps convey the sense of near-claustrophobia I felt standing between all those massive brick buildings near the Merrimack River. And I couldn’t help but wonder: Where did they get all those bricks? 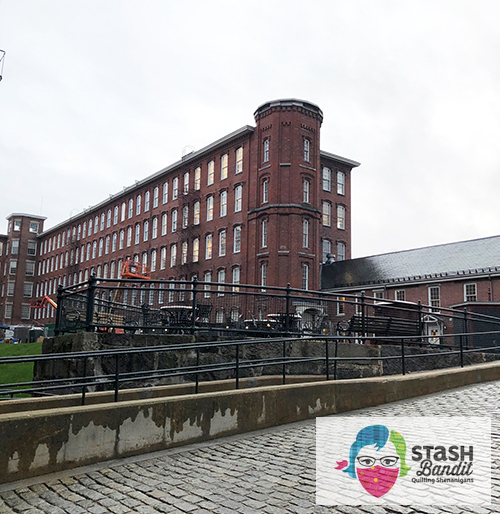 If you’re interested in the history, read the short piece below from the UMass Lowell Library Center for Lowell History: 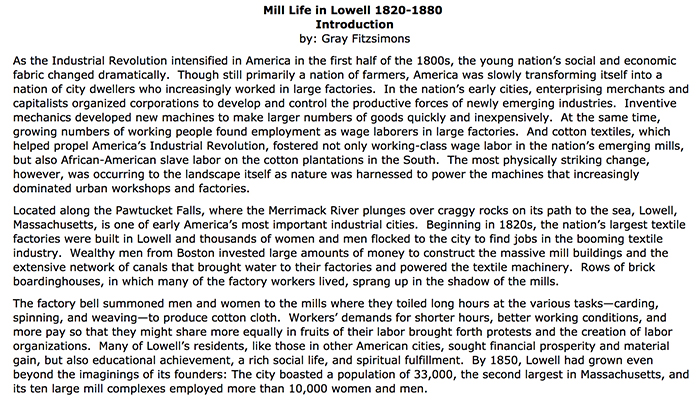 The Boott Cotton Mills are a fascinating look into what it was like to work in a textile mill in the 1800s. Visitors are treated to seeing a few of the looms up and running. The noise is deafening. 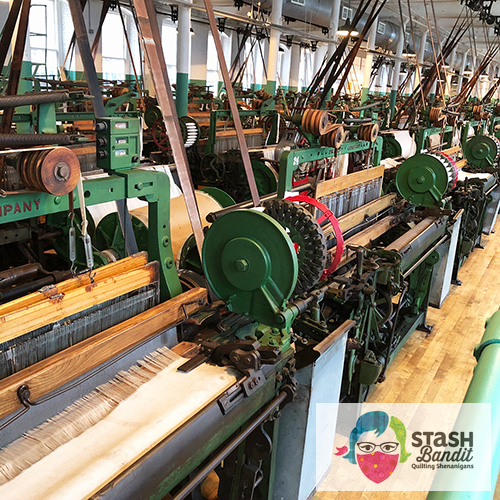 One can only imagine what it must have been like when all of the machines were going. One of the park rangers (the complex is managed by the National Park Service) chatted with us for a while and mentioned the need for leather belts that arose with the industrial revolution. 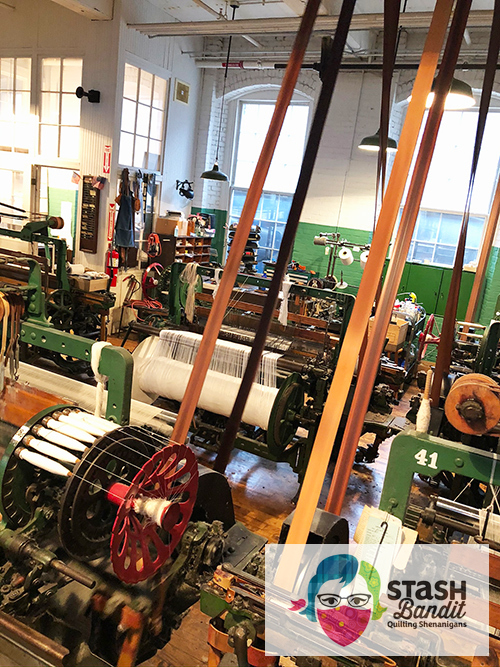 Where do you suppose the hide for the belts came from? Some came from cows, but most of the hides for belts to run the new machines of the day came from bison, which are commonly called buffalo (but that’s technically incorrect). Anyway, isn’t it interesting that the great bison herds of the Plains helped to run the industrial revolution? Who’d have guessed. 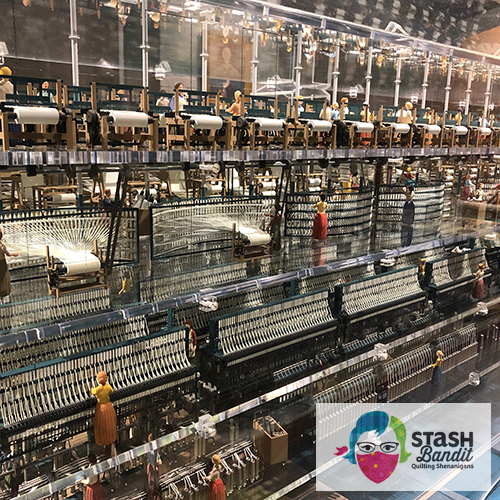 This glass-enclosed model shows how the mills were set up at one point. The earliest stages of making cotton into cloth happened on the lower floors and the process moved upward, floor by floor. The looms on which cloth was woven were on the top floor. 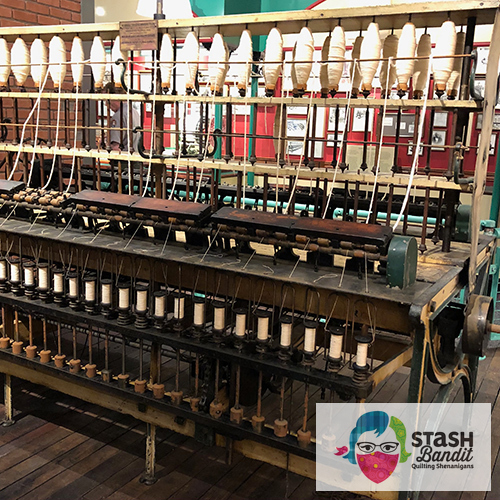 Things were constantly changing as improvements were made. So wrapping your head around how cloth was made is a tall order, and there isn’t usually one simple answer to any question you pose. 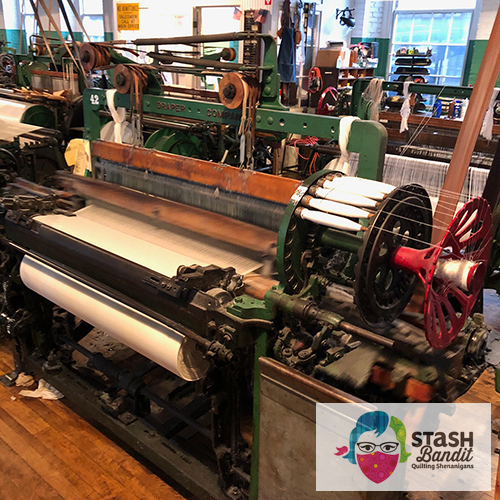 I am primarily a quilter, of course, but I’m interested in weaving, and I have a 12-harness Macomber floor loom on which I’ve managed to weave a few rugs. So I was fascinated by the warps, the heddles, the bobbins and the shuttles that were everywhere, flying so fast your eye could barely catch them. 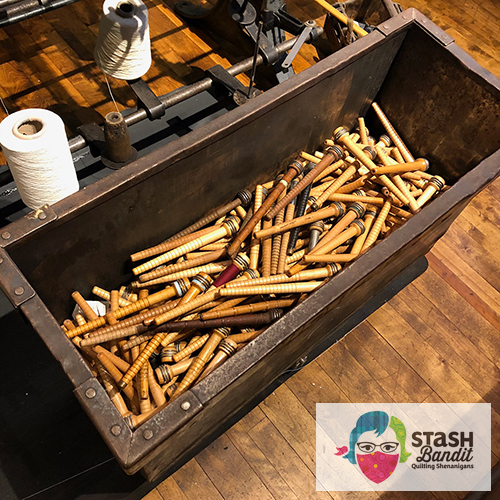 I have a small collection of bobbins, which are easily found and reasonably priced, but I’d never understood how they fit into commercial weaving. Now I do. 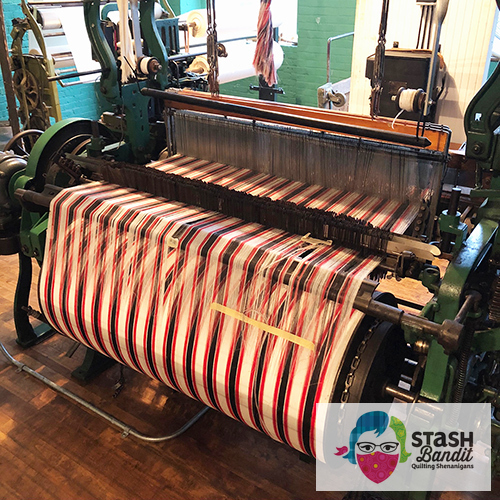 This loom was warped with red, white and blue. Below is the plaid fabric which was woven on this machine. 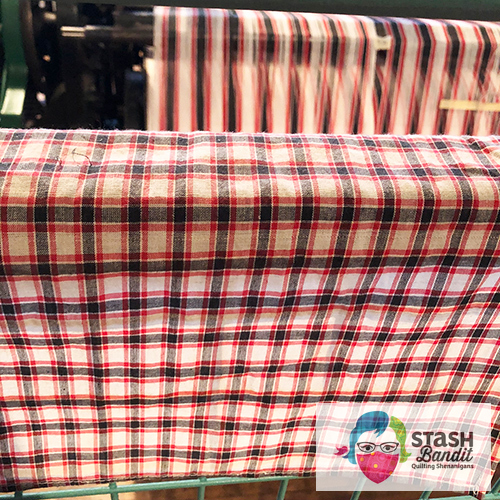 You can see the warped loom in the background. Running the machines means that a lot of cloth is woven over time in the museum, and it’s for sale at $3.50 per yard in a gift shop. I had to get a little, and I think I’ll sew it into a souvenir of this delightful day. 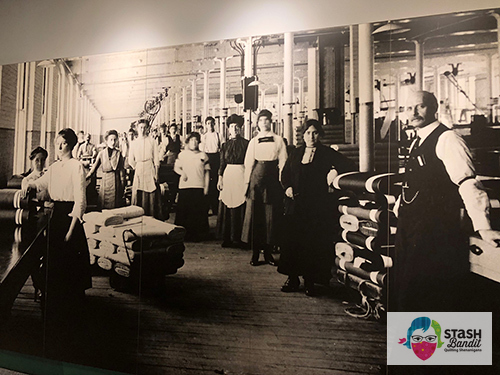 There is a separate exhibit covering the life of “mill girls” and immigrants who came with a desire to work and improve their lives. It’s well done and I learned so much. 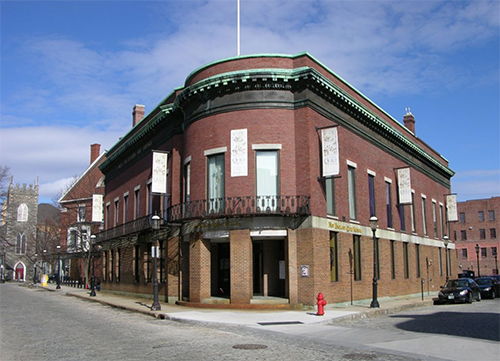 I enjoyed the quilt museum as well, with its extensive library and three distinct exhibits. Pictures were not allowed, but there were quilts from Social Justice Sewing Academy, quilts by Sue Garman and fabric sculptures by Priscilla Sage in an exhibit titled “Suspended.”