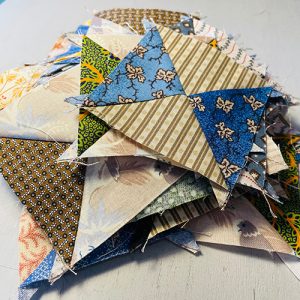 My friend LeeAnn is this sort of person: kind, smart, analytical, take-charge, open, wise, funny. So when LeeAnn says something, I listen up.

“I don’t understand why everyone thinks you have to trim the dog ears. They don’t hurt anything. It’s just extra work to cut them off.”

This started me thinking about the dog ears: those tiny triangles—the seam allowance overhang, if you will—that appear when you make half-square triangles.

Dog ears are innocent enough when there are just a few, but here was my carpet when I did a big project recently:

I have always cut the dog ears off, but I can’t say exactly why. After LeeAnn’s comment, I thought about it long and hard. Know what I finally remembered?

Alex made me do it.

That’s right. When I had kids at home and did not have another full-time job, I watched every episode of Simply Quilts that I could. And Alex Anderson said to cut off the “bunny ears.”

Who was I to argue?

I went to the Bible of quiltmaking, Quilts! Quilts!! Quilts!!! The Complete Guide to Quiltmaking by Diana McClun and Laura Nownes. What did these experts think?

There it is, right on page 104 of the Second Edition, in the section called Making Half-Square Triangles that begins on page 103. Number 8 says to “Trim the extensions and check the accuracy of the unit size.”

I’ve never heard them called extensions but hey, Diana and Laura’s book had sold more than 800,000 copies by the late ’90s, and I’ve never even written a book, so there you go.

By this time I was having fun and my curiosity was burning, so I pulled out Pat Sloan’s Teach Me to Sew Triangles. And with that I opened another can of worms, which is this:

Making half-square triangles larger than necessary and trimming them down.

That’s a topic for another post. But right on page 10, Pat Sloan has a plop-box called Dealing with Dog-Ears:

She says, “Notice how by trimming the triangle-squares to size, you’ve also trimmed off the ‘dog-ears.’ Removing them makes sewing multiple units together so much easier! So even if you don’t need to trim your units to a smaller size, be sure to cut off the dog-ears before assembling your quilt blocks.”

I checked one more source: Becoming a Confident Quilter by Elizabeth Dackson. This is an excellent book, written more recently (2013). And I find not one jot about the dog ears.

Perhaps modern quilt makers have bigger fish to fry? Are they trimming their dog ears or leaving them in place? If they’re not trimming, is the accuracy of their quilts in question?!

I have a big pile of quarter-square triangles waiting for me right now. I’m not even close to being finished—I need hundreds more. So it would save me a lot of time if I could just leave those dog-ears alone.

I’d like to know what you think. Let me know in the comments:

Do you trim off the dog-ears?

Why or why not?

I am seriously thinking about leaving them alone. Because honestly…

I think LeeAnn has a point.