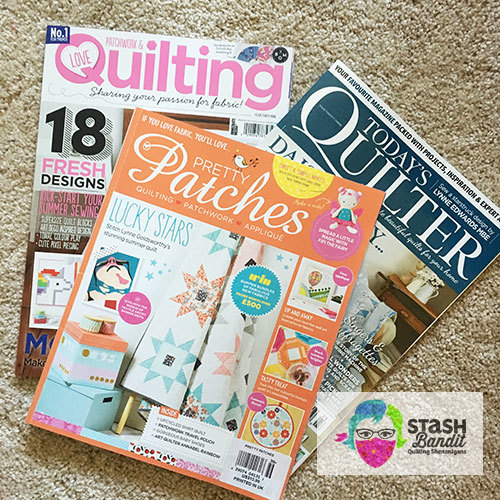 Quilt Mags Around the World: Part 1

I live a couple of hours from the nearest Barnes & Noble, and it’s probably just as well because when I go, I spend too much on books and lately, on magazines. I’m interested in quilting magazines because I worked for Quiltmaker for 11 years. So it’s been fascinating to see that B&N now stocks a number of titles from outside the U.S.

I haven’t been able to resist buying them just to compare and contrast their pages with more familiar publications.

Pretty Patches (with a tagline of Quilting • Patchwork • Applique) is printed in the U.K. by Tailor Made Publishing Ltd. They publish a selection of crafting titles, including Inside Crochet, Reloved and The Knitting Collection. 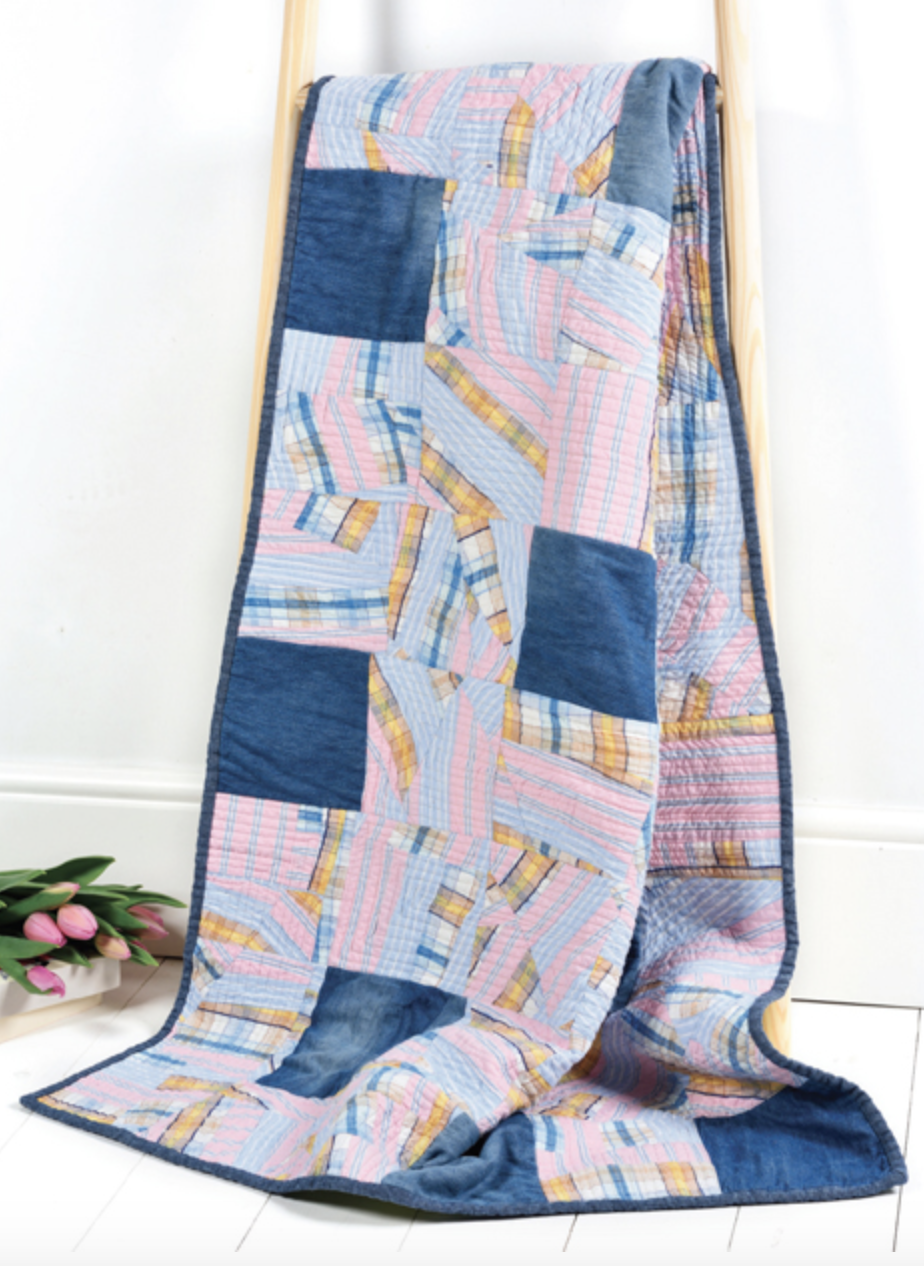 This quilt made from recycled garments by Chris English is featured in the June issue of Pretty Patches. Photo by Simon Muncer.

At about 8.5″ x 11″, it’s a larger format than most U.S. magazines, and the projects vary widely. The June issue has everything from baby booties to an elasticized bowl cover to a hot mitt, along with a softie called Fifi the Fairy. (“Softie” is a current term for stuffed toys.) 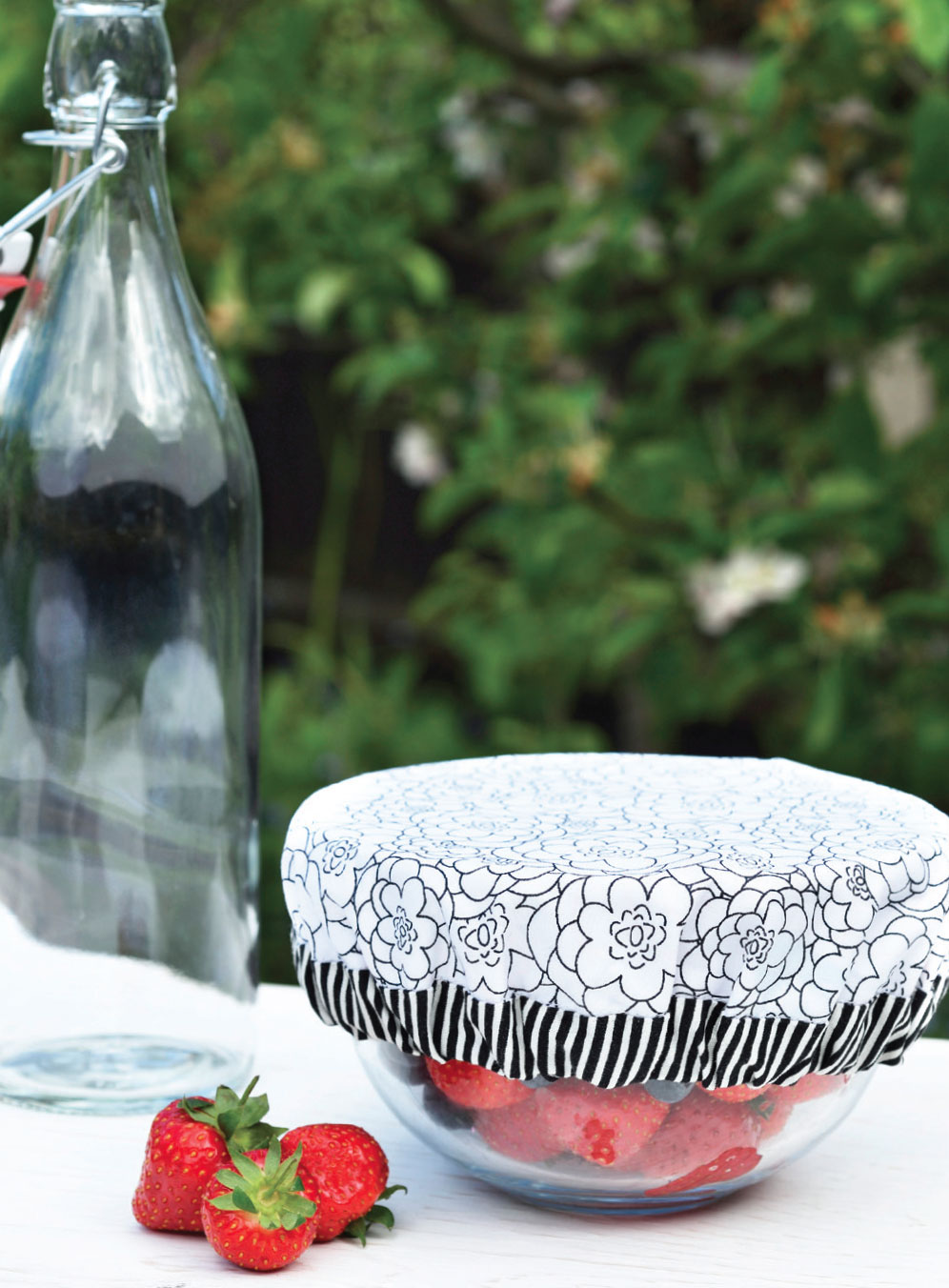 This elasticized bowl cover is one of the projects in Pretty Patchwork’s June issue.

There’s a zippered pouch, a hand-pieced hexie table topper, a quilt from recycled shirts, a small round wall quilt, pillows with crocheted trim, a string-pieced quilt and a traditional star quilt. 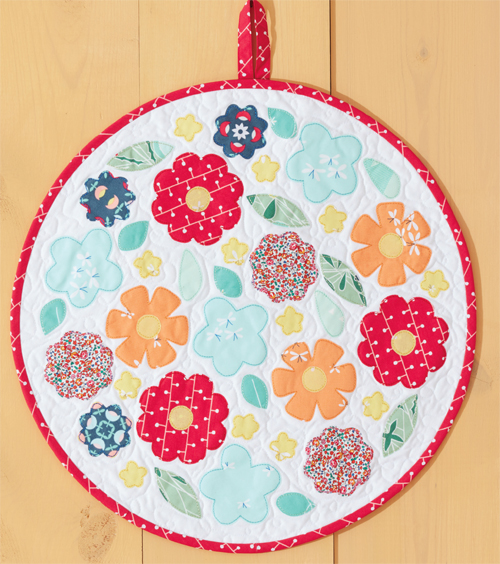 “Bloom” is a mini quilt featured in Pretty Patches. 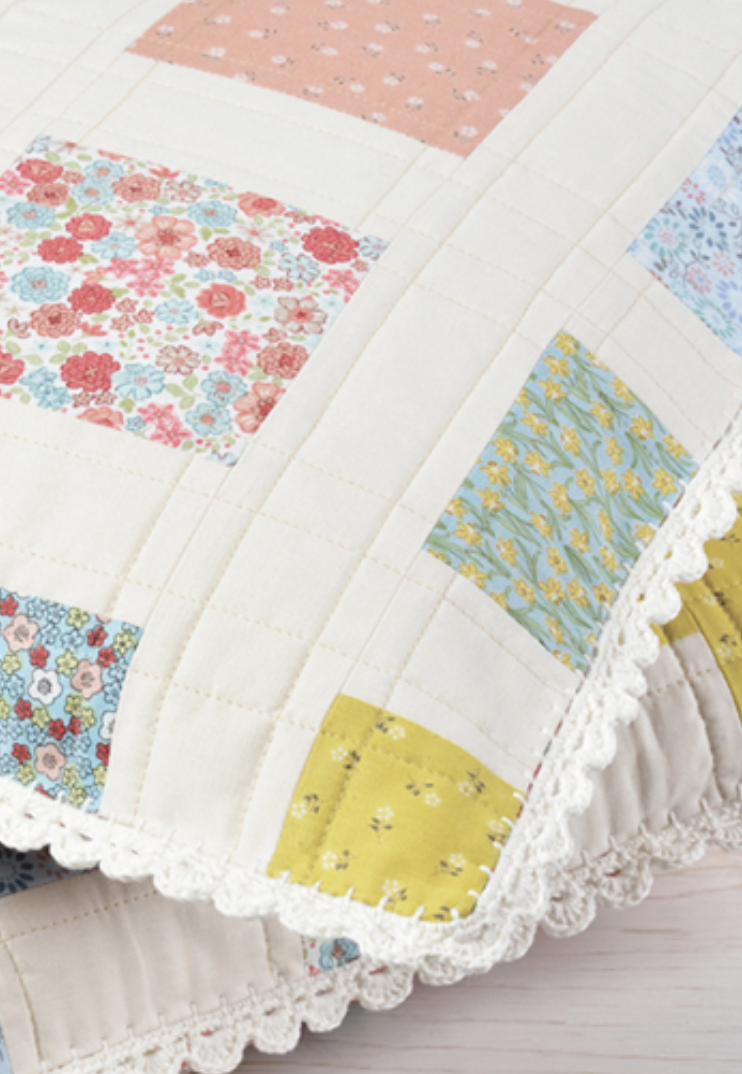 Before you buy, it’s good to know there are numerous small sewing projects that involve some patchwork, with a handful of actual quilts. Not a bad thing, just different from many U.S. quilt pattern magazines. 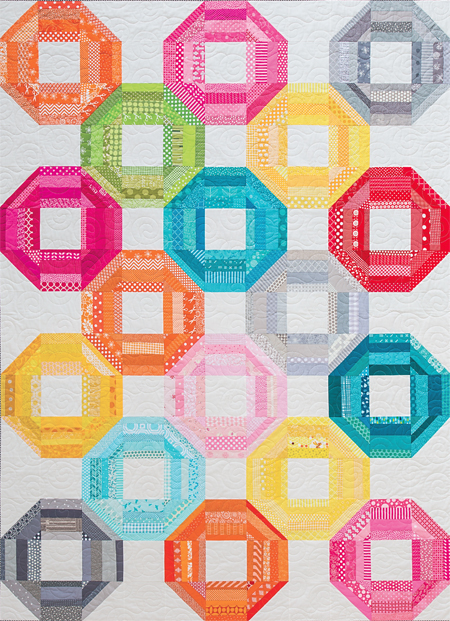 Donuts by Amanda Jean Nyberg is taken from No Scrap Left Behind, and is featured in Pretty Patches.

I noticed that several patterns are taken from books currently on the market, including Donuts by Amanda Jean Nyberg, taken from No Scrap Left Behind, and Pretty as a Picture by Jemima Flendt, taken from Weekend Quilting. I’m not familiar with this as a common practice in the U.S.

The patterns are not full size and in most cases must be enlarged for use. The full-size patterns are available for download, however, which is a handy convenience.

A lot of space in Pretty Patches is devoted to product and fabric reviews, and three full pages cover the work of Bonnie Smith, whose “Swimming Upstream” installation at the August 10–13 Festival of Quilts was upcoming at press time. The larger images show the quilting off nicely, and if I lived on the other side of the pond, I’d have scooted over to Birmingham to see the quilts for myself. They are life sized, and I imagine would really steal the show in person. I wasn’t able to get photos for this post, so trust me and visit Bonnie’s page for her “Swimming Upstream” series.

Annabel Rainbow is the subject of a four-page article which also teased the August Festival of Quilts. The article gives a glimpse into the artist’s process and purpose. The images are large enough to draw you in and sure enough, I found myself at annabelrainbow.co.uk shortly thereafter. 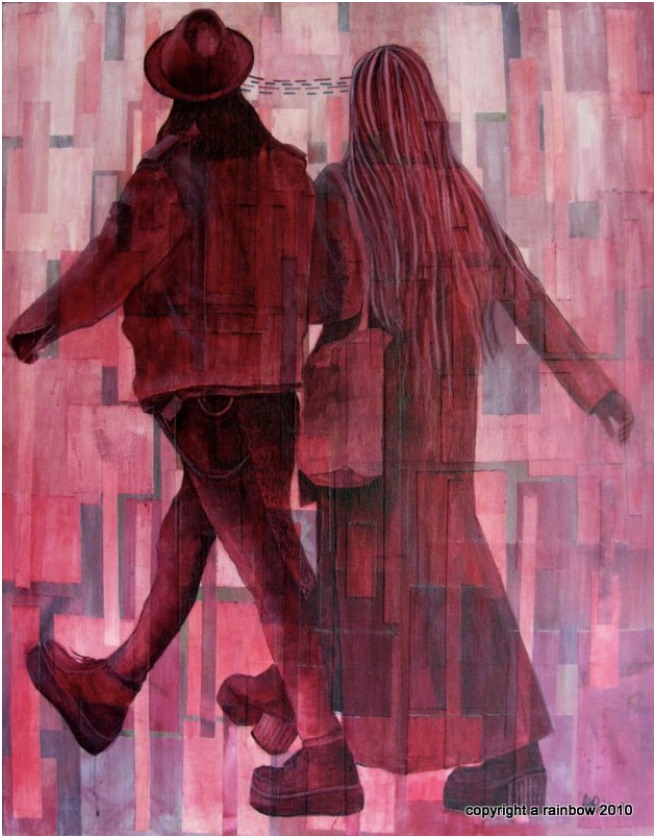 You may remember seeing one of Annabel’s quilt images make the rounds on Facebook a while back. It stirred up all kinds of emotions, but at its core it’s a feminist piece with a powerful message. It’s called “Hello Dear, What Did You Do Today?” and it’s shown below. 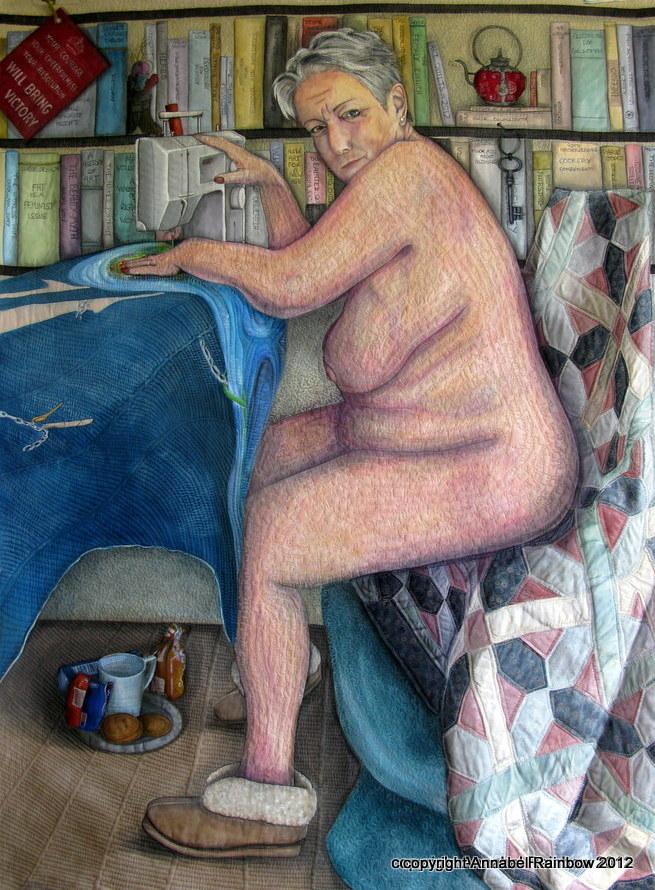 This quilt image made the rounds on Facebook a while back. Its maker is Annabel Rainbow, whose work is the subject of an article in the June issue of Pretty Patches. Used with permission.

I was also interested in the advertising inside Pretty Patches. Some of the same major players had full-page ads including Brother, Sulky, Janome (two full pages and the back cover!) and Horn. There were several advertisers with full-page coverage who were unfamiliar to me.

The biggest difference in advertising was the number of smaller ads by many quilt-related businesses in the U.K. It’s fun to see what shops in another part of the world emphasize, and to visit their websites to poke around. 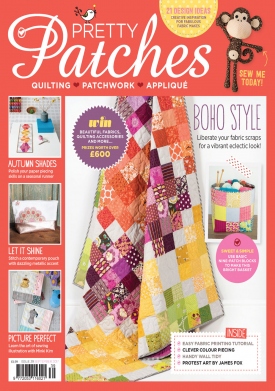 And speaking of websites, peek at Pretty Patches online. You’ll find issue information, links to buy and an active blog which highlights the projects in each issue one by one. My paper copy was $13.99 USD, but the digital editions are just $6.44 when you convert from British pounds.

If you want small patchwork projects and a little change of pace, give a look to Pretty Patches.