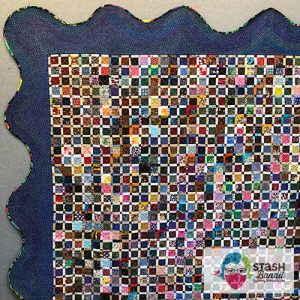 I’m in the habit of hanging one exemplary quilt on my display stand to set the mood as people arrive. For the scrap quilt trunk show, I use Nine Patch Jambalaya. 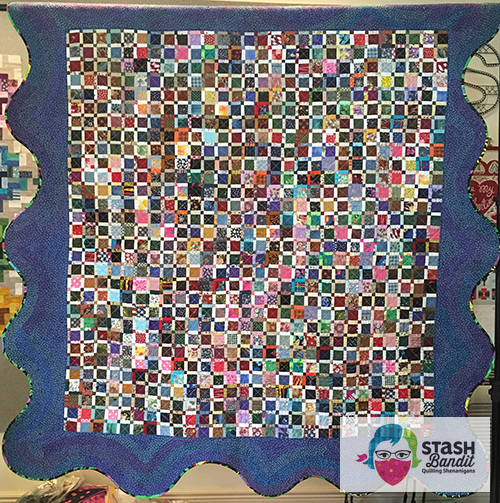 Nine Patch Jambalaya, designed and made by
Diane Harris of Stash Bandit

This quilt generates excitement, which amazes me but doesn’t surprise me any more. Today I want to tell you how I made it.

One year my small group of 20 quilters made each other Nine Patches. Every month we’d make some for every person in the group. It turned out to be a lot of blocks! I had about 225 Nine Patches made by other people at the end of the year.

As I looked them over, it was daunting. How could I make them all work together? There were batiks and Halloween, 30’s and Civil War, old calico and Christmas and bright novelty fabrics. There were homespuns in country colors, florals, uglies and poor quality low-thread-count stuff from Walmart. There was everything. 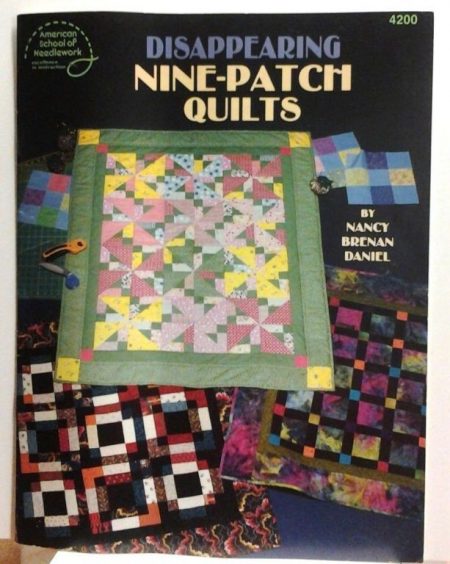 To the best of my knowledge, this is the original book on Disappearing Nine Patch Quilts by Nancy Brenan Daniel. 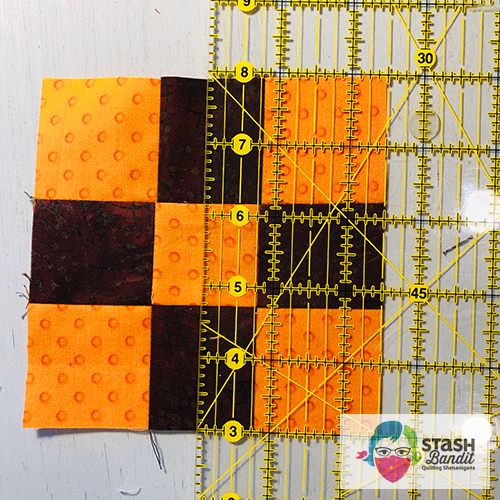 I put them all in a big pile and began to sew them back together in random order. I consistently kept the tiny square in the top left corner.

You might not guess it by looking at the quilt, but I thought it was a disaster. As with most exchange blocks, they were not all the same size. So my foursomes of cut units were not the same size either. Nothing lined up at all. I stressed and fretted. Eventually I decided I could lose my mind worrying about it, or I could just plunge ahead. And plunge ahead I did. 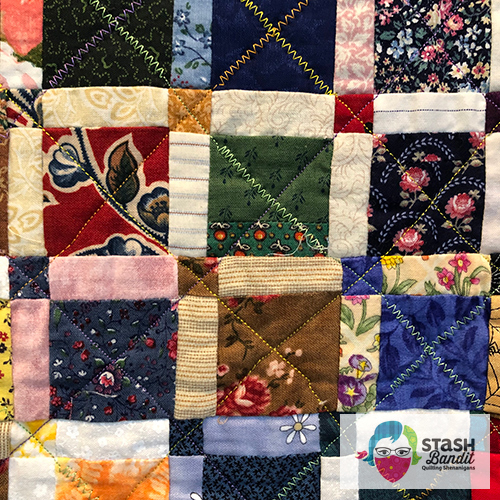 Funny thing was, even though the little intersections did not match up, by the time I got to the end of each row, things pretty much evened out. Every row was about the same length. 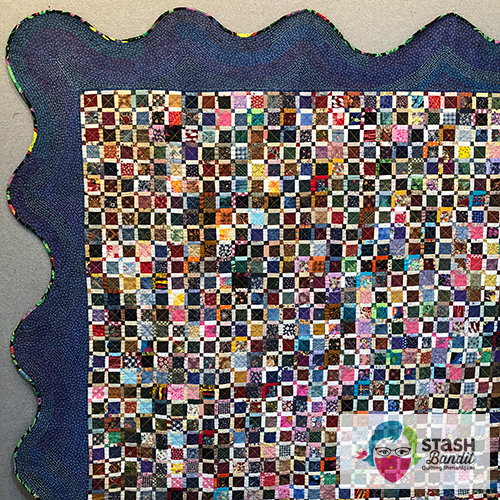 And I realized that when you stood back from the quilt, you didn’t even notice the intersections. Instead you saw hundreds of tiny pieces, and it was actually starting to look like something spectacular. 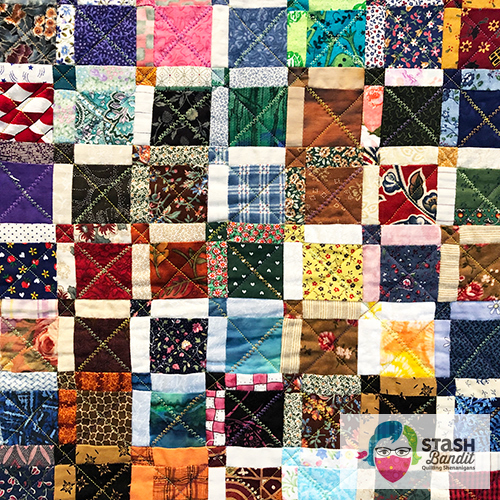 I forged ahead. It took some time to sew them back together, and I had just a small handful left over at the end. 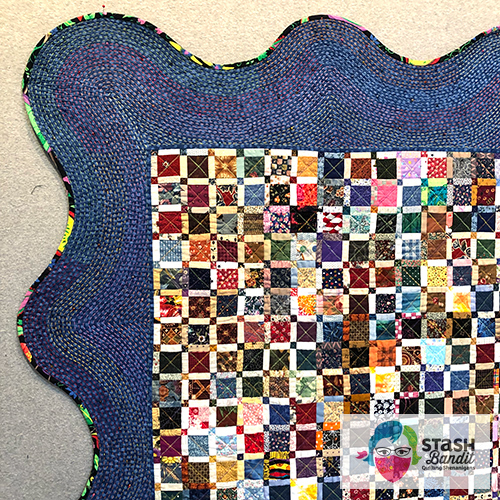 I decided it needed a border strong enough to be like an exclamation point without competing for attention. I chose a blue Moda Marble Dot. I sewed 10″ strips of it to the quilt top, bottom and sides. I used a walking foot to quilt the center with diagonal lines of straight and zigzag stitches.

And then I had another idea which was actually born out of desperation because I knew my machine quilting could not do anything good for the border. 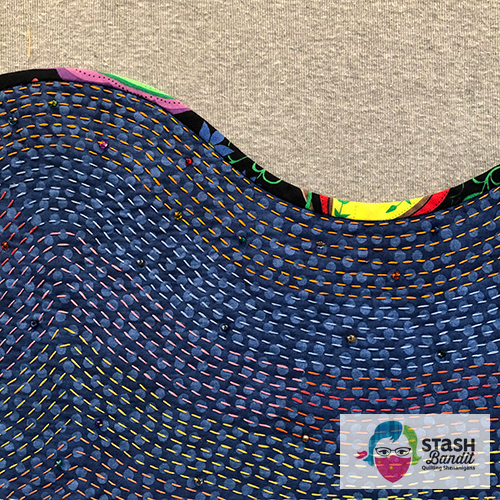 I love handwork but I can’t make tiny, beautiful quilting stitches. I’ve taken classes and practiced a lot but I just cannot do it. My solution was to do a big stitch by hand with three strands of embroidery floss.

I knew I wanted to make wavy edges on this quilt, and I decided that wonky would be best since I didn’t know how to do the math to make them even. I drew a wonky curved line toward the outside of the wide borders, cut on the line, and bound the quilt with bias binding. 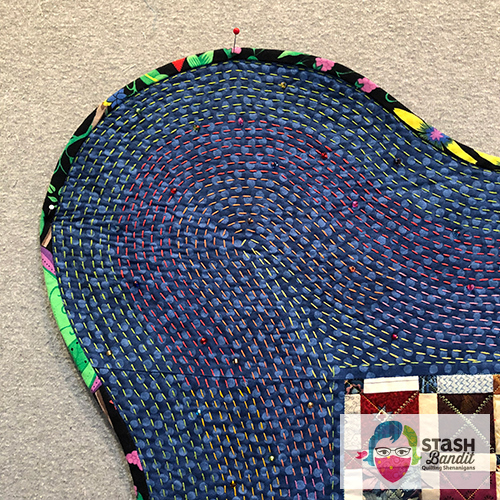 Then I made the first row of big stitches right next to the binding, and worked my way inward. Each row is about 1/4″ from the next. I changed colors randomly and just figured it out as I went. Well before I reached the center, I made one line of big stitches a fat quarter-inch away from the seam, outside the seam allowance. This gave me a good stopping point for the other stitching. You can see it just above the Stash Bandit watermark on the photo above.

I added in a few beads as an experiment. They are fine and they add interest but I don’t think they make that much difference in the big picture. Totally optional. 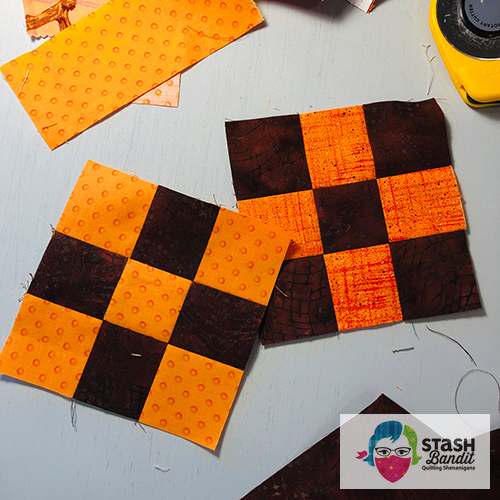 If you want to make a Nine Patch Jambalaya, start with 2″ strips or squares. Make Nine Patch blocks until you’re tired of them. It doesn’t matter if the darker fabrics are in the middle and the corners as shown in the right block just above, or at the north/south/east/west positions as shown in the block on the left. In fact, you’ll want some of each kind.

They will be 5″ unfinished. Cut them in half in both directions (vertically and horizontally). The middle will be 2-1/2″ from the raw edge. 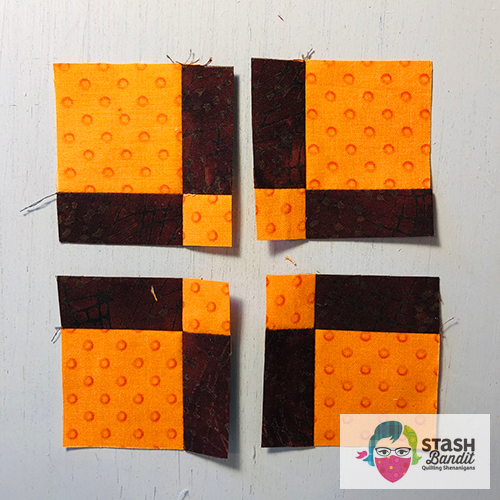 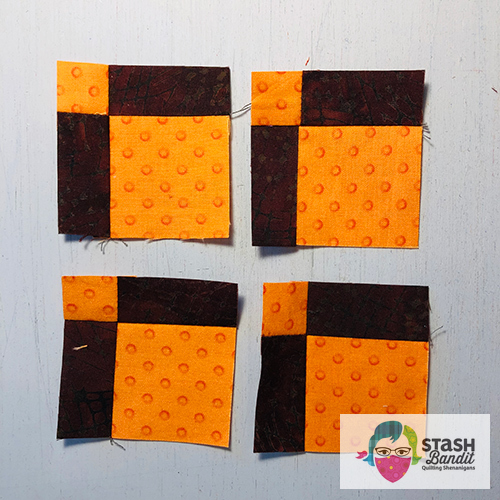 Mix them all up and sew them back together randomly, always keeping the tiny square in the same position. It doesn’t matter which corner you have it in, as long as you’re consistent.

Make the quilt center as large as you want it. Mine is about 28 units across and 31 units down for a total of 868. (That requires 217 Nine Patches to start.) But it really doesn’t matter.

Nine Patch Jambalaya, designed and made by
Diane Harris of Stash Bandit

Attach wide borders (about 10″) to the sides, the top and the bottom. Cut the wavy edges wonky. Bind with bias binding. Use three strands of regular embroidery floss in your choice of colors for the big stitches in the border, making the rows about 1/4″ apart. It’s worth noting that in order to make the big stitches look nice on the front of the quilt, they are very short on the back of the quilt. They look totally different. 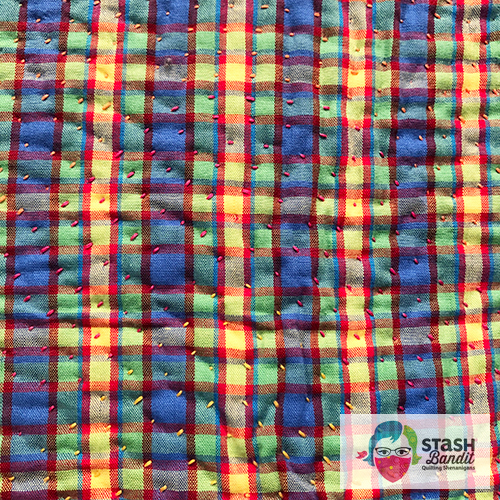 This is how the big stitches look on the back side of the quilt.

This makes a great guild or small group project. Or just make your own Nine Patches, in which case they’ll all be the same size, always a plus! Here’s my label: 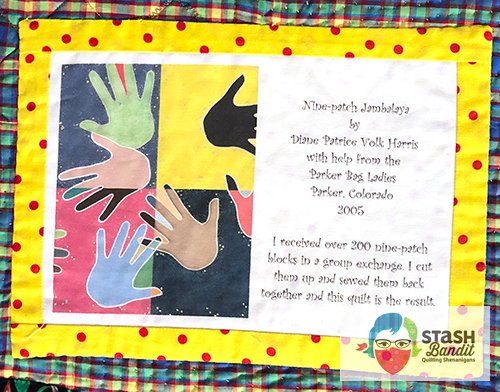 If you make a Nine Patch Jambalaya, please email me a photo using diane@stashbandit.net. I’d love to hear from you. And tell you what: If you want to get started, I will make you a few Nine Patches and send them to you. Just ask!