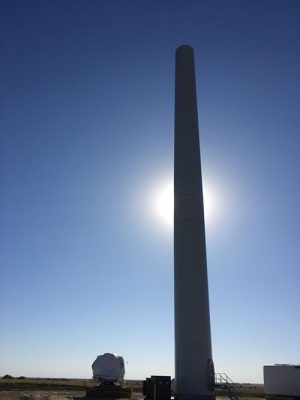 How to Build a Windmill (Quilt, Farm, Whatever)

A few years back I had an idea to build a trunk show of quilts based on one simple Windmill quilt block. I’ve been working feverishly on the quilts because I’ll give the presentation for the first time next month in Holdrege, Nebraska. 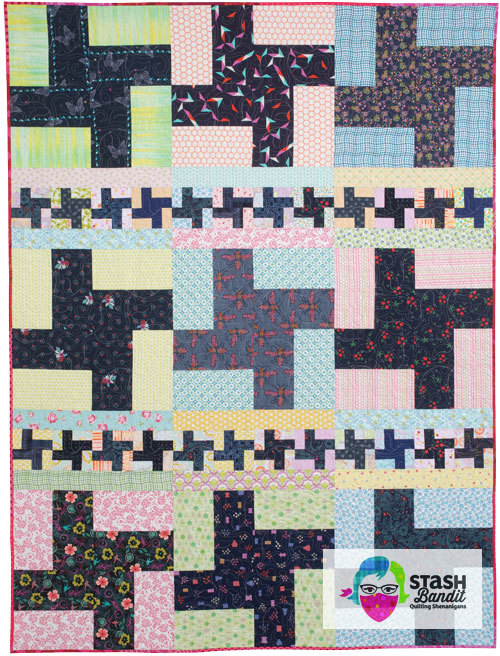 It’s a charming bit of serendipity that I’m also living, quite literally, inside a wind farm that’s being built here in south central Nebraska. 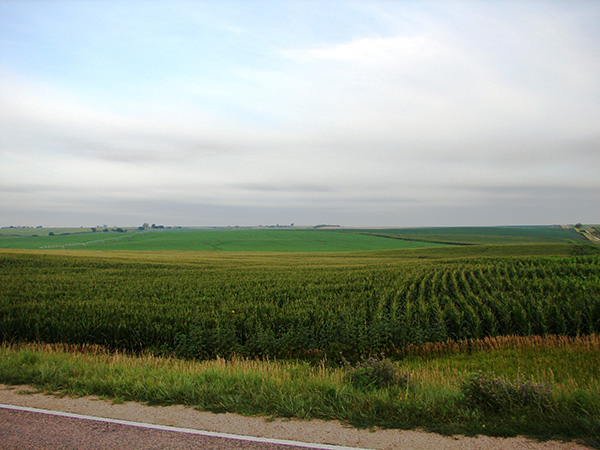 I live in a very rural area where farming is everything. It’s beautiful countryside: wide open spaces, a few hills and great expanses with unbroken views. 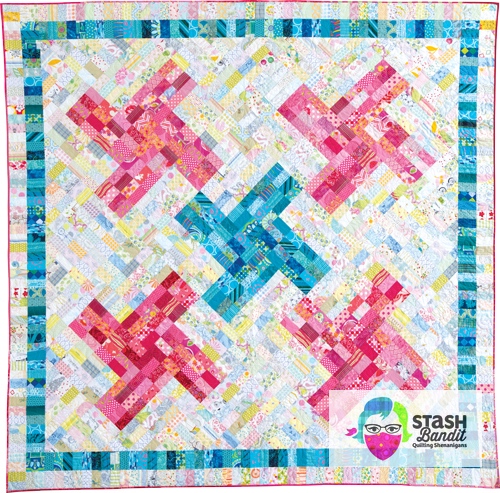 So it’s no surprise that many local residents have mixed feelings, or in some cases, not-so-mixed feelings, about the new Cottonwood Wind Project. For the record, I’m not sure how I feel about it. The arguments on both sides seem to be based on emotion, and it’s difficult to tell what the facts are. 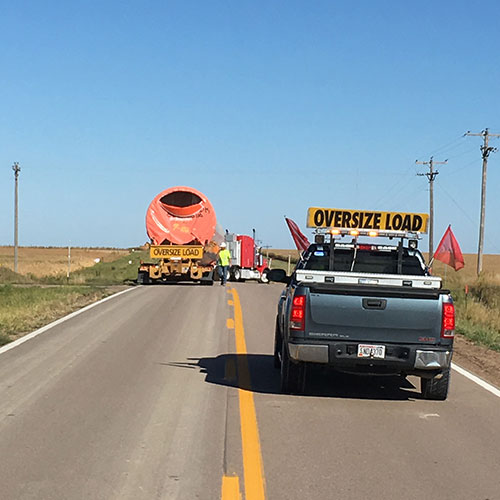 At any rate, a few weeks ago the activity level around here amped up noticeably, and it’s been hard to ignore. Delays on the highway are common. The parts and pieces of the windmills are massive. 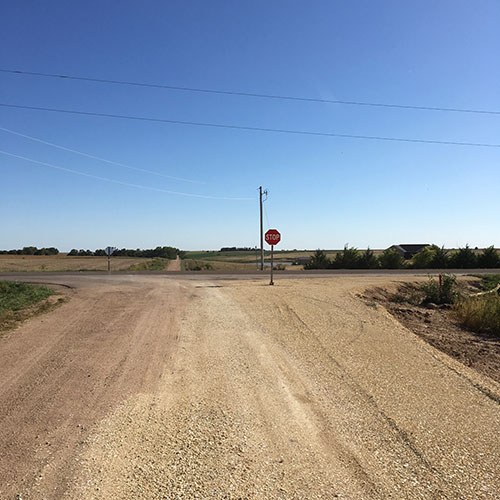 Many intersections of the highway and the gravel roads have been widened to accommodate them. You can see above where the stop sign is still in its original location, and how much wider they made this road.  I’d say they widened it by about half. 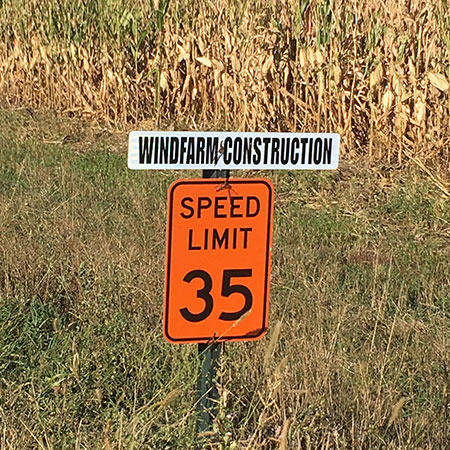 On the afternoon I shot these photos, my curiosity had finally welled up to overflowing. I wanted to see:

How do you build a wind farm?

This is of course a highly simplified version of what happens, but it’s my version as a local observer. I spent an afternoon driving around to the different sites, and I found many with no gates and no signs so I felt free to inspect. I didn’t disturb anything, except maybe my peace of mind.

To understand the process of building a wind farm, let’s back up a couple of years. There are many public hearings. The county commissioners have to approve the project, and then you have to decide if you are open to having a windmill on your ground. 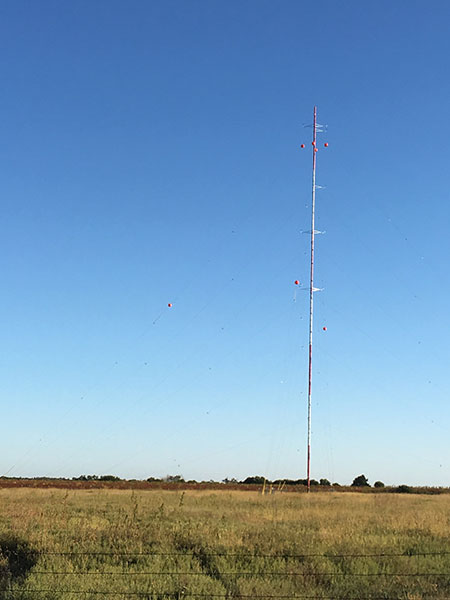 If you are, your attorney goes over the paperwork and then you sign. They start paying you a small annual stipend several years before the wind farm is actually built, and they put up a test tower to measure the wind at your location. The one above is just southwest of my house, about a quarter-mile away. There are many of them all around our neighborhood. 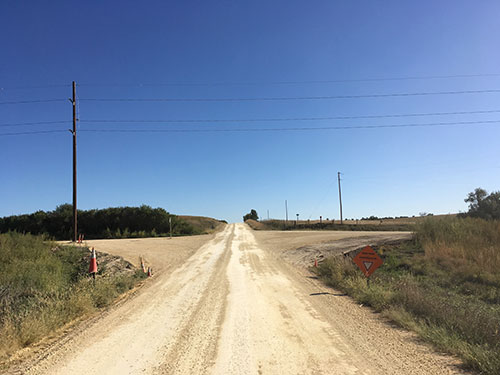 When they decide exactly where to put the windmills, they build a road to each site. Above, in the center of the photo, is a county road near my house; the roads that go to the left and the right were recently build and they both lead to a windmill site.

The developers just knocked down the crops and built a really nice road right out into the middle of a cornfield. It’s kind of strange. We’ve been joking that the windmill roads are actually better than our county roads. Sad but true. 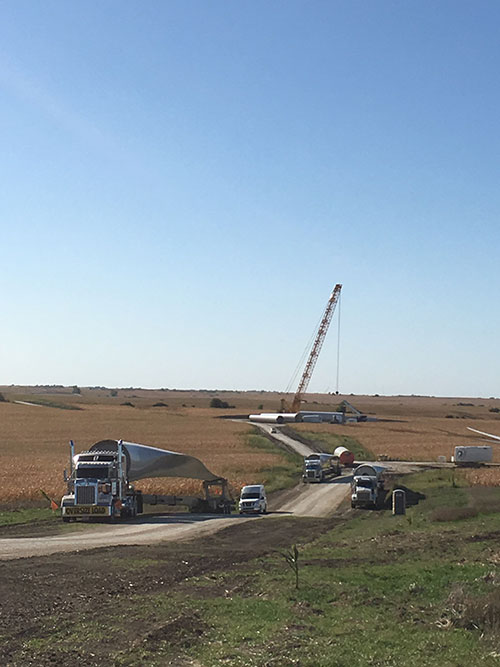 Next thing you know, windmill parts and pieces start to show up everywhere.

The semi-tractor on the left above is toting one windmill blade. It’s enormous. 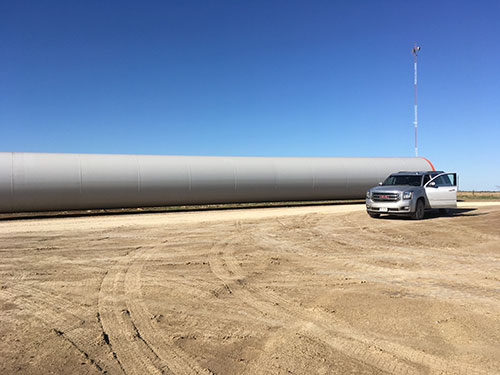 Each set of three blades sits atop a huge pillar-like tower, shown lying down above. You can see how it dwarfs my SUV. I couldn’t fit the whole thing in the photo-frame. 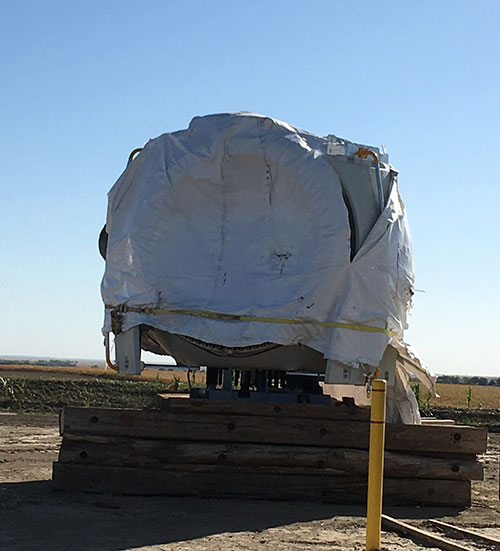 This part was covered in plastic, but it’s easy to see that the base of one blade fits into that round opening. There are three openings, one for each blade. 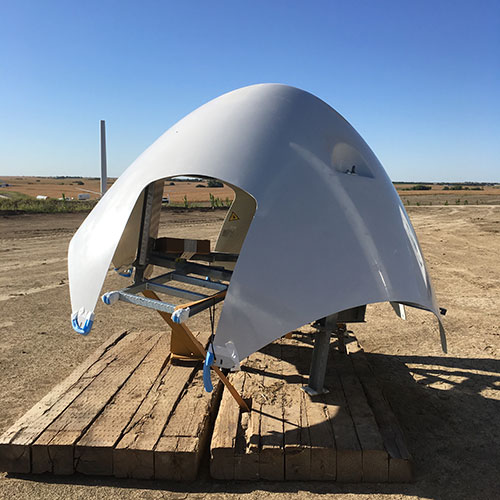 And I’d call this the nose of the windmill; it fits onto the front of the whole assembly. 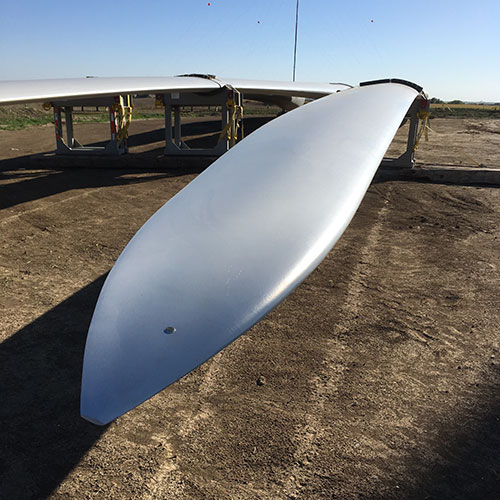 I know it sounds stupid but I had it in my head that somehow, some way, I was going to touch one of those windmill blades before it was installed. And on the day I arrived, nobody was around and again, no gate and no signs, so I drove right up to it and… 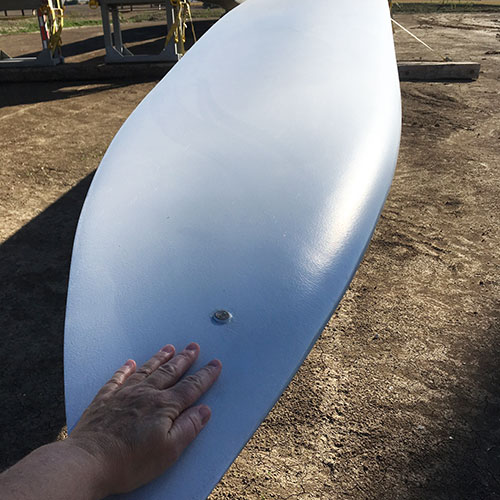 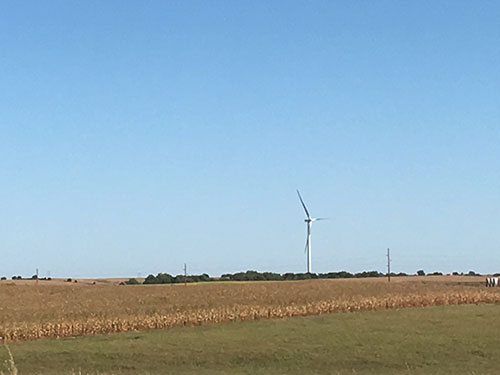 At the time I took these a few weeks ago, just one windmill was standing. 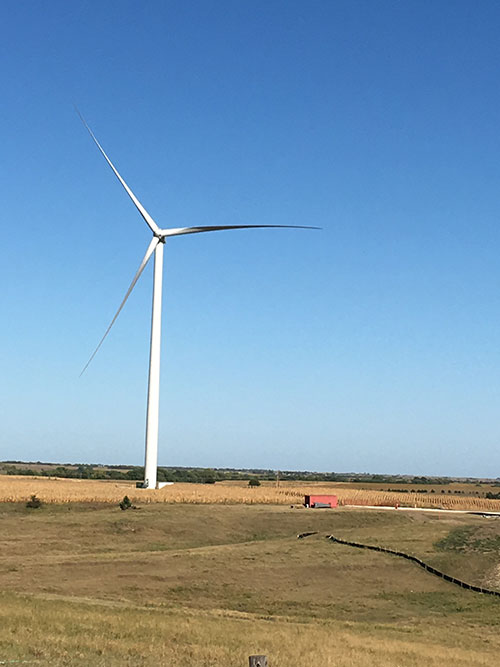 In a way I think it’s really beautiful. 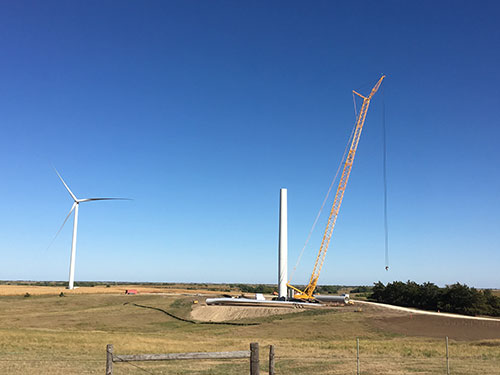 But it was already evident that it wouldn’t be alone for long. And in the days since, many more windmills have gone up. Fifty-two turbines will eventually be raised, and this is Phase I of the project. In Phase II, another 89 turbines are planned, according to this official Nebraska Energy Office website. 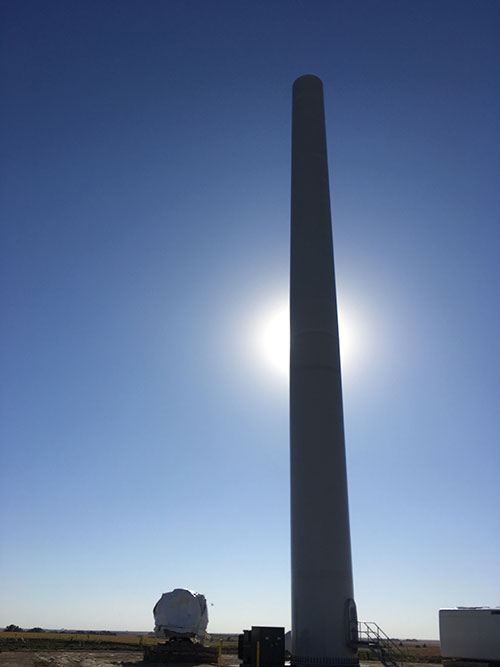 We’re not the first people to have our world changed by a wind farm—by technology—and we won’t be the last. But it breaks my heart in a way, even as it’s been fascinating to watch. 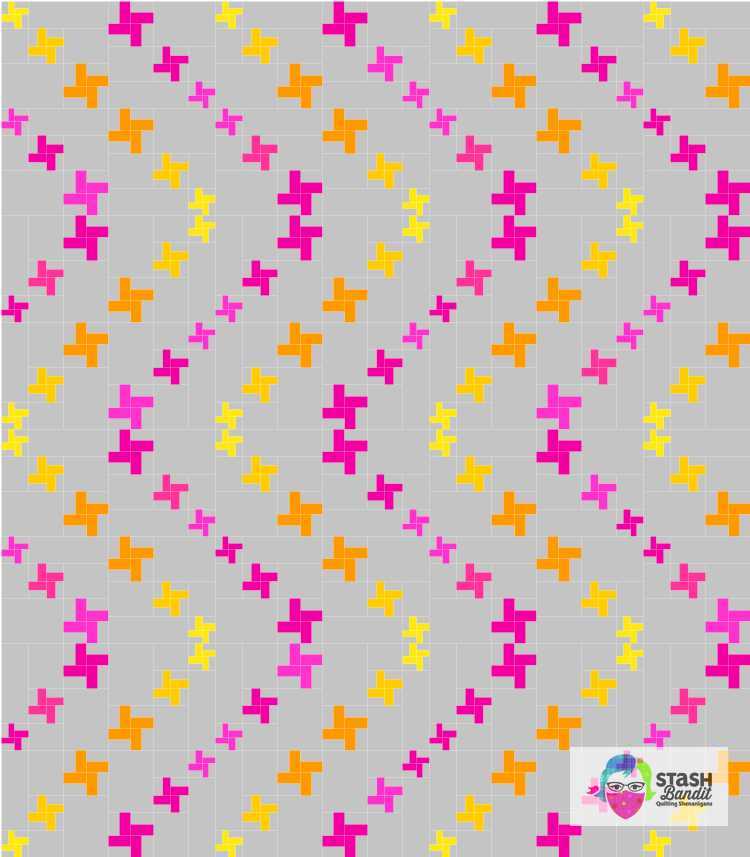 Artwork for Triple Threat, based on Baby Windmills. Designed by Diane Harris.

I think I’ll go back to designing quilts—back to building my own wind farm. I know how to handle that.

I have a trunk show of quilts based on a simple Windmill block! Windy Wonders is available to quilt groups nationwide. I’d love to share it with you. Please get in touch today. Let’s Talk Quilts! 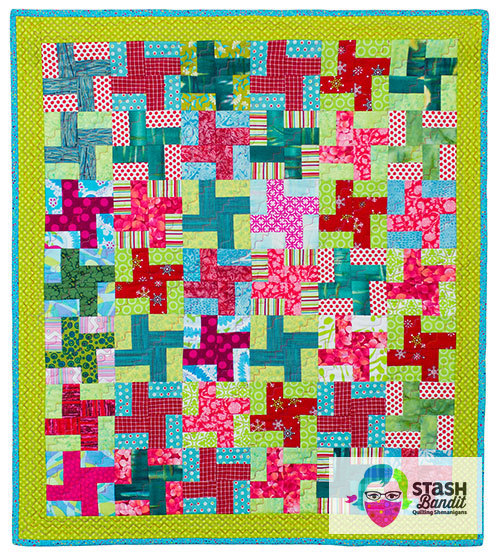