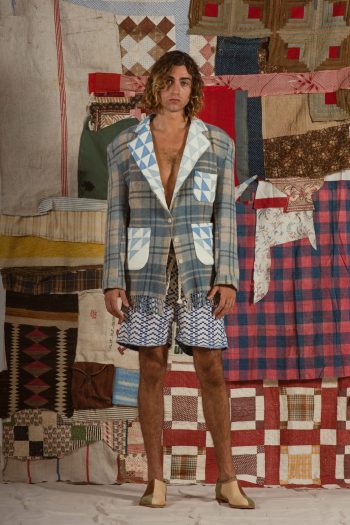 Controversy in the Quilt World

There’s a hubbub in our part of the universe, have you heard?

About a week ago, on Jan. 28, Mary Fons posted a YouTube video called “Stop Cutting Up Quilts to Make Clothes.” A graphic image (below) was used on Instagram to publicize the video.

And the graphic did its job. Not only did it entice me to watch the video, almost 15 thousand other people watched it too. Many of those watched after this became news in the quilt world, but still. For the sake of comparison, Mary has about 8000 subscribers and her videos mostly garner a few hundred views each on YouTube/Twitch.

So here’s a little background if you need it.

Mary Fons is the 40-something daughter of quilting superstar Marianne Fons. Marianne and her business partner Liz Porter created an empire of sorts selling magazines, books, videos and tools for quilters, among other things. They became widely known before selling the business.

Mary Fons has long been inside the quilt industry. She hosted Fons & Porter’s Love of Quilting television program on PBS, she founded a magazine for beginning modern-leaning sewists called Quilty, she wrote a long-running column for Quilts Inc. (the organization that gives us International Quilt Festival), she more recently served as editor-in-chief of Quiltfolk magazine and she’s an active live-streamer on various quilt topics via YouTube and Twitch. (There’s much, much more to her quilting resume.)

The internet has not always been kind to Mary Fons.

And that’s an understatement. There were quilters at every turn who did not like her and they weren’t shy about saying so. They made awful comments and personal attacks. Mary called them out and forged ahead.

There was a time when I wondered if it wasn’t convenient to ride (into the industry) on her mother’s coattails, but then I heard Mary speak at QuiltCon and she was eloquent. She is smart, she generally does her homework and she isn’t afraid to take a stand.

Part of her background is in theatre and so she is…theatrical. She’s very expressive and it seems like many of her detractors have taken issue with that. But it’s how she communicates—her way of being in the world.

Now back to Mary’s recent video.

Mary spoke passionately about famous designers like Emily Bode and regular quilters like you and me cutting up quilts to make garments. She strongly opposes the practice and she tells us why.

But a lot of people have told Mary that she is…

…wrong, privileged, dramatic, clickbait, condescending, gatekeeping girl boss and more. So much more. The general idea among these folks is “how dare you tell me how I can make art.”

On the other hand, many people agree with Mary

and have applauded her bold stand.

There are plenty of knickers in knots over this controversy. Learn more and decide for yourself:

Passion for patchwork: make-do-and-mend hits the Paris catwalk: More about Emily Bode and her fashion designs made from old quilts

I’d like to know what you think. Is it all right for someone to use an old quilt to make something else? Does it matter if they’re a famous designer or a regular quilter?

I can’t wait to hear what you think.